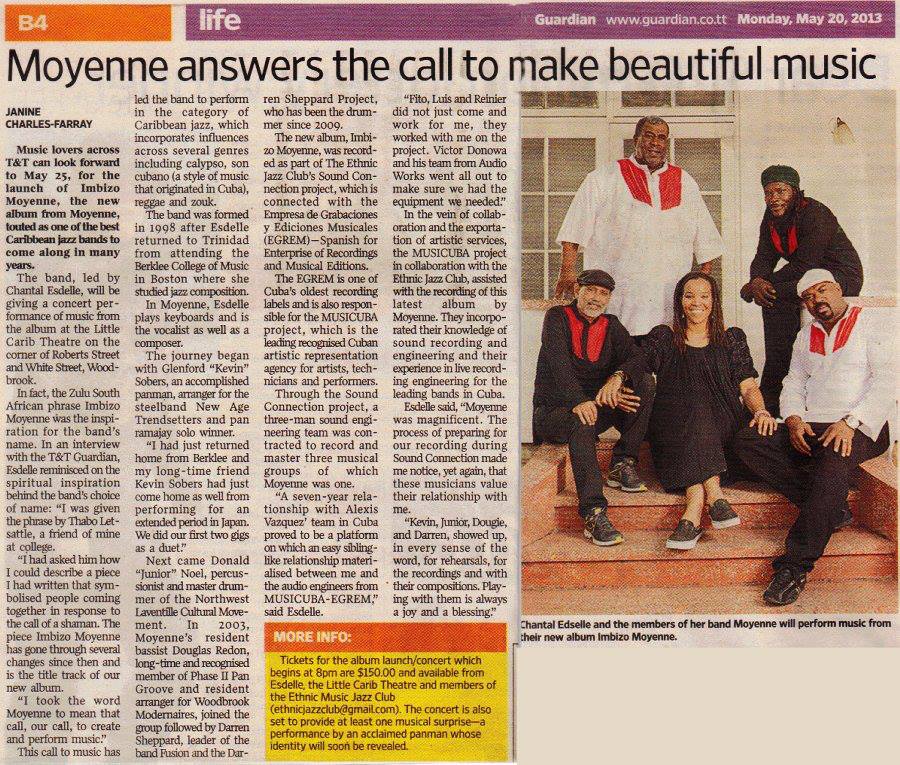 Note originally published on Sun May 19 2013

Music lovers across T&T can look forward to May 25, for the launch of Imbizo Moyenne, the new album from Moyenne, touted as one of the best Caribbean jazz bands to come along in many years.

The band, led by Chantal Esdelle, will be giving a concert performance of music from the album at the Little Carib Theatre on the corner of Roberts Street and White Street, Woodbrook.

In fact, the Zulu South African phrase Imbizo Moyenne was the inspiration for the band’s name. In an interview with the T&T Guardian, Esdelle reminisced on the spiritual inspiration behind the band’s choice of name: “I was given the phrase by Thabo Letsattle, a friend of mine at college.

“I had asked him how I could describe a piece I had written that symbolised people coming together in response to the call of a shaman. The piece Imbizo Moyenne has gone through several changes since then and is the title track of our new album.

“I took the word Moyenne to mean that call, our call, to create and perform music.”

This call to music has led the band to perform in the category of Caribbean jazz, which incorporates influences across several genres including calypso, son cubano (a style of music that originated in Cuba), reggae and zouk.

The band was formed in 1998 after Esdelle returned to Trinidad from attending the Berklee College of Music in Boston where she studied jazz composition.

In Moyenne, Esdelle plays keyboards and is the vocalist as well as a composer.

“I had just returned home from Berklee and my long-time friend Kevin Sobers had just come home as well from performing for an extended period in Japan. We did our first two gigs as a duet.”

Next came Donald “Junior” Noel, percussionist and master drummer of the Northwest Laventille Cultural Movement. In 2003, Moyenne’s resident bassist Douglas Redon, long-time and recognised member of Phase II Pan Groove and resident arranger for Woodbrook Modernaires, joined the group followed by Darren Sheppard, leader of the band Fusion and the Darren Sheppard Project, who has been the drummer since 2009.

The new album, Imbizo Moyenne, was recorded as part of The Ethnic Jazz Club’s Sound Connection project, which is connected with the Empresa de Grabaciones y Ediciones Musicales (EGREM)–Spanish for Enterprise of Recordings and Musical Editions.

The EGREM is one of Cuba’s oldest recording labels and is also responsible for the MUSICUBA project, which is the leading recognised Cuban artistic representation agency for artists, technicians and performers.

Through the Sound Connection project, a three-man sound engineering team was contracted to record and master three musical groups of which Moyenne was one.

“A seven-year relationship with Alexis Vazquez’ team in Cuba proved to be a platform on which an easy sibling-like relationship materialised between me and the audio engineers from MUSICUBA-EGREM,” said Esdelle.

“Fito, Luis and Reinier did not just come and work for me, they worked with me on the project. Victor Donowa and his team from Audio Works went all out to make sure we had the equipment we needed.”

In the vein of collaboration and the exportation of artistic services, the MUSICUBA project in collaboration with the Ethnic Jazz Club, assisted with the recording of this latest album by Moyenne. They incorporated their knowledge of sound recording and engineering and their experience in live recording engineering for the leading bands in Cuba.

Esdelle said, “Moyenne was magnificent. The process of preparing for our recording during Sound Connection made me notice, yet again, that these musicians value their relationship with me.

“Kevin, Junior, Dougie, and Darren, showed up, in every sense of the word, for rehearsals, for the recordings and with their compositions. Playing with them is always a joy and a blessing.”

Tickets for the album launch/concert which begins at 8pm are $150.00 and available from Esdelle, the Little Carib Theatre and members of the Ethnic Music Jazz Club (ethnicjazzclub@gmail.com). The concert is also set to provide at least one musical surprise–a performance by an acclaimed panman whose identity will soon be revealed.