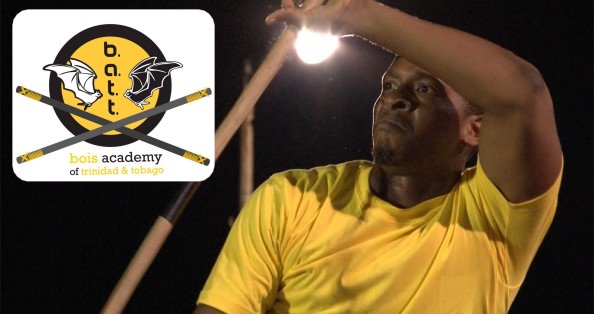 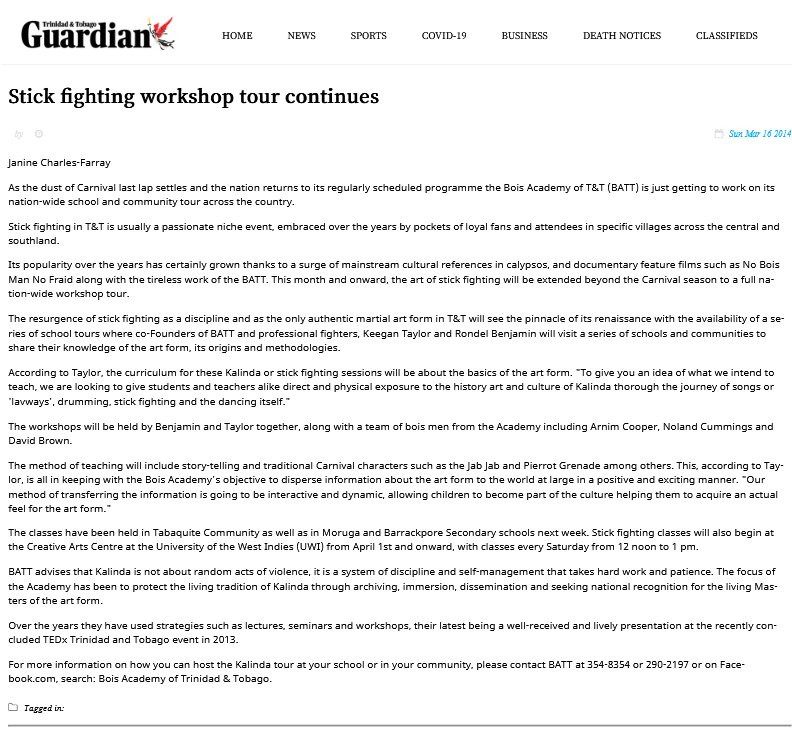 As the dust of Carnival last lap settles and the nation returns to its regularly scheduled programme the Bois Academy of T&T (BATT) is just getting to work on its nation-wide school and community tour across the country.

Stick fighting in T&T is usually a passionate niche event, embraced over the years by pockets of loyal fans and attendees in specific villages across the central and southland.

Its popularity over the years has certainly grown thanks to a surge of mainstream cultural references in calypsos, and documentary feature films such as No Bois Man No Fraid along with the tireless work of the BATT. This month and onward, the art of stick fighting will be extended beyond the Carnival season to a full nation-wide workshop tour.

The resurgence of stick fighting as a discipline and as the only authentic martial art form in T&T will see the pinnacle of its renaissance with the availability of a series of school tours where co-Founders of BATT and professional fighters, Keegan Taylor and Rondel Benjamin will visit a series of schools and communities to share their knowledge of the art form, its origins and methodologies.

According to Taylor, the curriculum for these Kalinda or stick fighting sessions will be about the basics of the art form. “To give you an idea of what we intend to teach, we are looking to give students and teachers alike direct and physical exposure to the history art and culture of Kalinda thorough the journey of songs or ‘lavways’, drumming, stick fighting and the dancing itself.”

The workshops will be held by Benjamin and Taylor together, along with a team of bois men from the Academy including Arnim Cooper, Noland Cummings and David Brown.

The method of teaching will include story-telling and traditional Carnival characters such as the Jab Jab and Pierrot Grenade among others. This, according to Taylor, is all in keeping with the Bois Academy’s objective to disperse information about the art form to the world at large in a positive and exciting manner. “Our method of transferring the information is going to be interactive and dynamic, allowing children to become part of the culture helping them to acquire an actual feel for the art form.”

The classes have been held in Tabaquite Community as well as in Moruga and Barrackpore Secondary schools next week. Stick fighting classes will also begin at the Creative Arts Centre at the University of the West Indies (UWI) from April 1st and onward, with classes every Saturday from 12 noon to 1 pm.

BATT advises that Kalinda is not about random acts of violence, it is a system of discipline and self-management that takes hard work and patience. The focus of the Academy has been to protect the living tradition of Kalinda through archiving, immersion, dissemination and seeking national recognition for the living Masters of the art form.

Over the years they have used strategies such as lectures, seminars and workshops, their latest being a well-received and lively presentation at the recently concluded TEDx Trinidad and Tobago event in 2013.

For more information on how you can host the Kalinda tour at your school or in your community, please contact BATT at 354-8354 or 290-2197 or on Facebook.com, search: Bois Academy of Trinidad & Tobago.