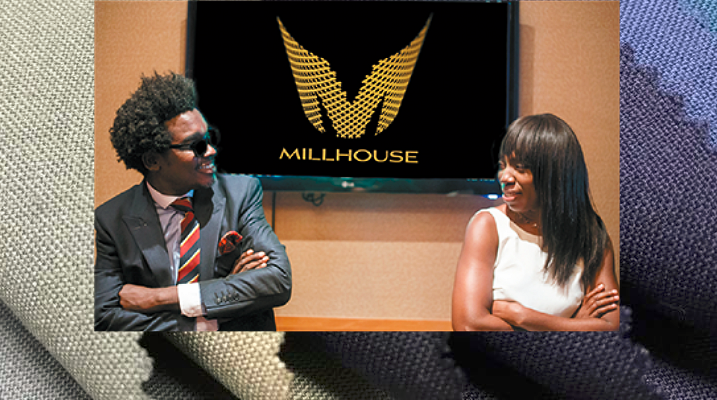 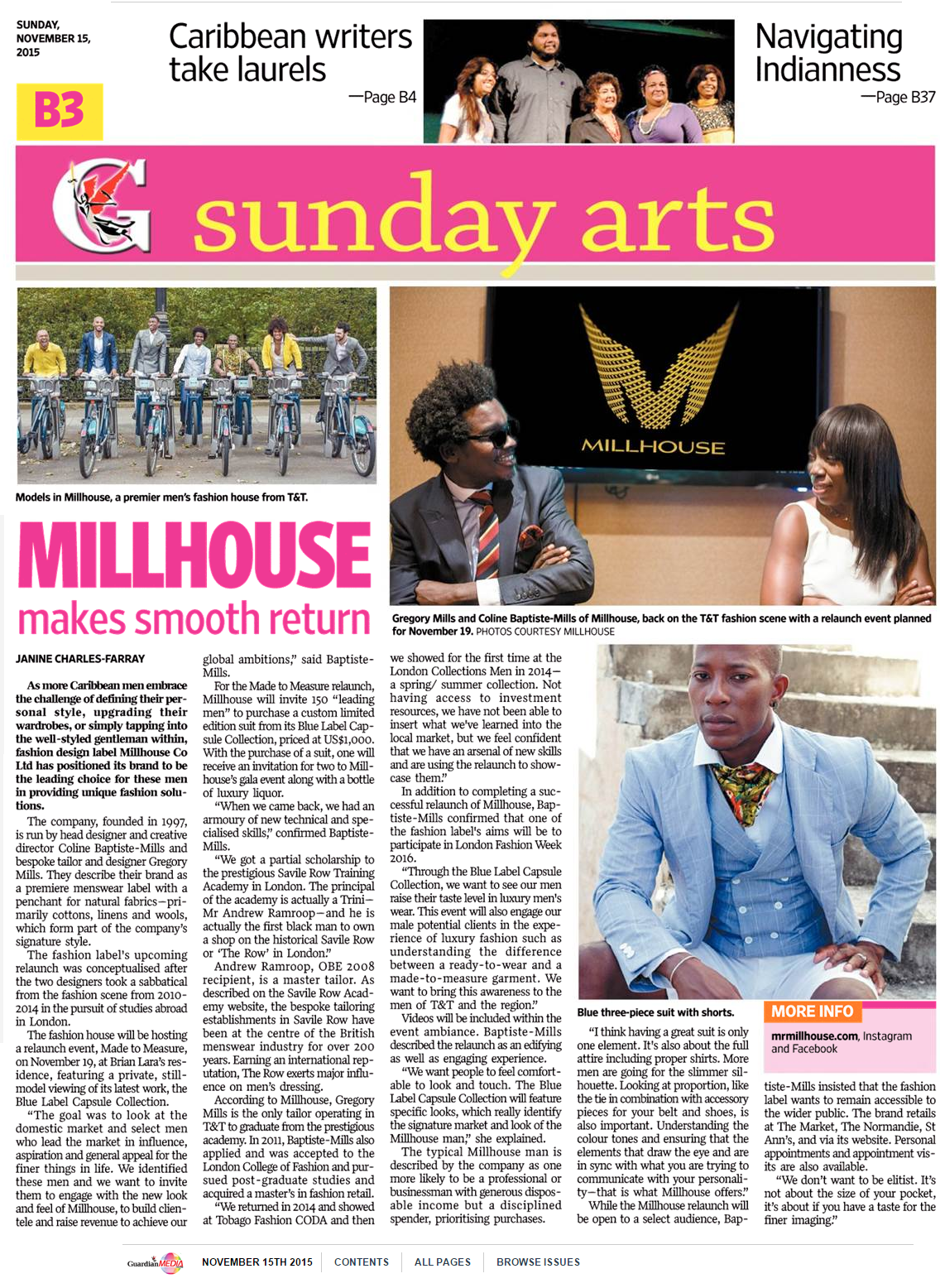 As more Caribbean men embrace the challenge of defining their personal style, upgrading their wardrobes, or simply tapping into the well-styled gentleman within, fashion design label Millhouse Co Ltd has positioned its brand to be the leading choice for these men in providing unique fashion solutions.

The company, founded in 1997, is run by head designer and creative director Coline Baptiste-Mills and bespoke tailor and designer Gregory Mills.

They describe their brand as a premiere menswear label with a penchant for natural fabrics–primarily cottons, linens and wools, which form part of the company’s signature style. The fashion label’s upcoming relaunch was conceptualised after the two designers took a sabbatical from the fashion scene from 2010- 2014 in the pursuit of studies abroad in London.

The fashion house will be hosting a relaunch event, Made to Measure, on November 19, at Brian Lara’s residence, featuring a private, still-model viewing of its latest work, the Blue Label Capsule Collection.

“The goal was to look at the domestic market and select men who lead the market in influence, aspiration and general appeal for the finer things in life. We identified these men and we want to invite them to engage with the new look and feel of Millhouse, to build clientele and raise revenue to achieve our global ambitions,” said Baptiste-Mills.

For the Made to Measure relaunch, Millhouse will invite 150 “leading men” to purchase a custom limited edition suit from its Blue Label Capsule Collection, priced at US$1,000. With the purchase of a suit, one will receive an invitation for two to Millhouse’s gala event along with a bottle of luxury liquor.

“When we came back, we had an armoury of new technical and specialised skills,” confirmed Baptiste-Mills.

“We got a partial scholarship to the prestigious Savile Row Training Academy in London. The principal of the academy is actually a Trini–Mr Andrew Ramroop–and he is actually the first black man to own a shop on the historical Savile Row or ‘The Row’ in London.”

Andrew Ramroop, OBE 2008 recipient, is a master tailor. As described on the Savile Row Academy website, the bespoke tailoring establishments in Savile Row have been at the centre of the British menswear industry for over 200 years. Earning an international reputation, The Row exerts major influence on men’s dressing.

According to Millhouse, Gregory Mills is the only tailor operating in T&T to graduate from the prestigious academy. In 2011, Baptiste-Mills also applied and was accepted to the London College of Fashion and pursued post-graduate studies and acquired a master’s in fashion retail.

“We returned in 2014 and showed at Tobago Fashion CODA and then we showed for the first time at the London Collections Men in 2014–a spring/ summer collection. Not having access to investment resources, we have not been able to insert what we’ve learned into the local market, but we feel confident that we have an arsenal of new skills and are using the relaunch to showcase them.”

In addition to completing a successful relaunch of Millhouse, Baptiste-Mills confirmed that one of the fashion label’s aims will be to participate in London Fashion Week 2016.

“Through the Blue Label Capsule Collection, we want to see our men raise their taste level in luxury men’s wear. This event will also engage our male potential clients in the experience of luxury fashion such as understanding the difference between a ready-to-wear and a made-to-measure garment. We want to bring this awareness to the men of T&T and the region.”

Videos will be included within the event ambiance. Baptiste-Mills described the relaunch as an edifying as well as engaging experience.

“We want people to feel comfortable to look and touch. The Blue Label Capsule Collection will feature specific looks, which really identify the signature market and look of the Millhouse man,” she explained.

The typical Millhouse man is described by the company as one more likely to be a professional or businessman with generous disposable income but a disciplined spender, prioritising purchases.

“I think having a great suit is only one element. It’s also about the full attire including proper shirts. More men are going for the slimmer silhouette. Looking at proportion, like the tie in combination with accessory pieces for your belt and shoes, is also important. Understanding the colour tones and ensuring that the elements that draw the eye and are in sync with what you are trying to communicate with your personality–that is what Millhouse offers.”

While the Millhouse relaunch will be open to a select audience, Baptiste-Mills insisted that the fashion label wants to remain accessible to the wider public. The brand retails at The Market, The Normandie, St Ann’s, and via its website. Personal appointments and appointment visits are also available.

“We don’t want to be elitist. It’s not about the size of your pocket, it’s about if you have a taste for the finer imaging.”