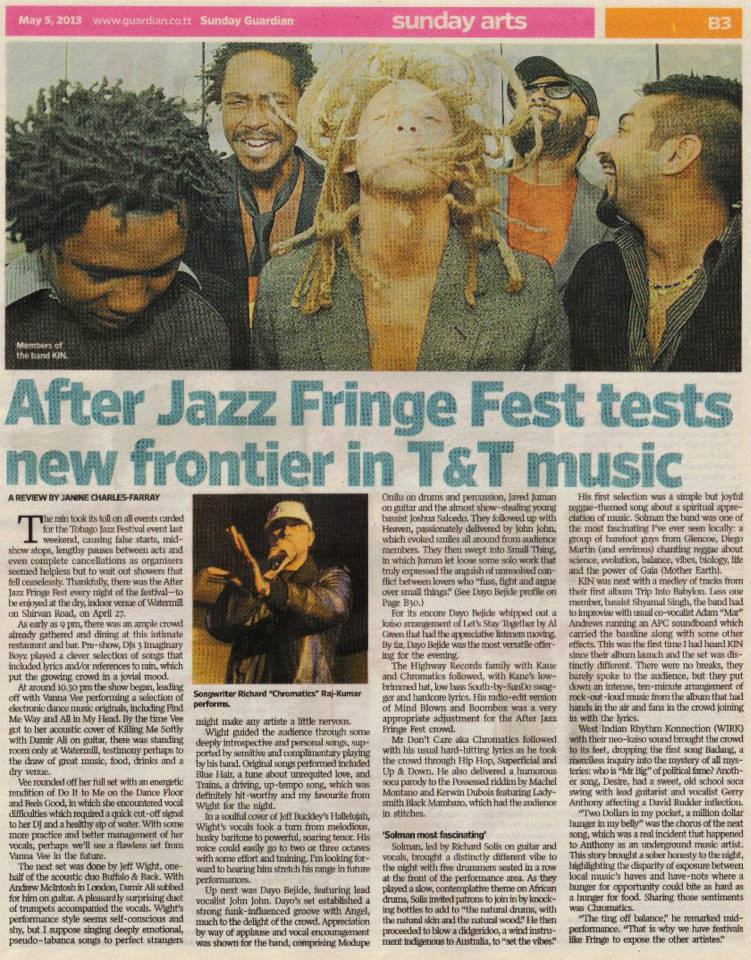 Over the past four years, a solid network of local artistes has banded together to create spaces and opportunities to perform, promote and expose their music to wider audiences.

They call themselves the Fringe Movement and they believe in the power of artistic collaboration of all local musicians and artistes toward building a more inclusive music scene.

One of the highlights of their calendar year is the After Jazz Fringe Festival, which takes place every year during the jazz season in Tobago.

Sheldon Holder, front man for 12 The Band, one of the Fringe Movement organisers, said, “This is an initiative being undertaken by several local artistes with a view to sharing their music with a different, more international listening audience.”

Before the event in Tobago, the Fringe Movement presented its After Jazz FUNdraiser 2 on April 17. Held at Bohemia on Murray Street in Woodbrook, it featured the neo-kaiso band West Indian Rhythm Konnection (Wirk) and T&T hip hop artist Chromatics.

This year’s festival which takes place from April 25-27, starts at Mt Irvine Beach Facility with a free-to-the-public cooler lime and acoustic jam by the musicians on the beach.

On April 26, the festival’s first night of performances will be at Bar Hop-In, featuring the T&T bands Solman, Kin, Gyazette, singer/songwriter Jeff Wight and Chromatics.

Advance tickets for the shows cost $80 and are available through Fringe Movement committee members via Facebook. Tickets can also be purchased online at O2ticket.com, or at the door.

Holder sees the festival as an opportunity to showcase the variety of music bubbling up on the edges of the T&T music world.

“The kind of music we are bringing to the Tobago residents, visitors and patrons of the Jazz Experience is the best of Port-of-Spain’s live music scene which takes place throughout the year and not just at Carnival time.”