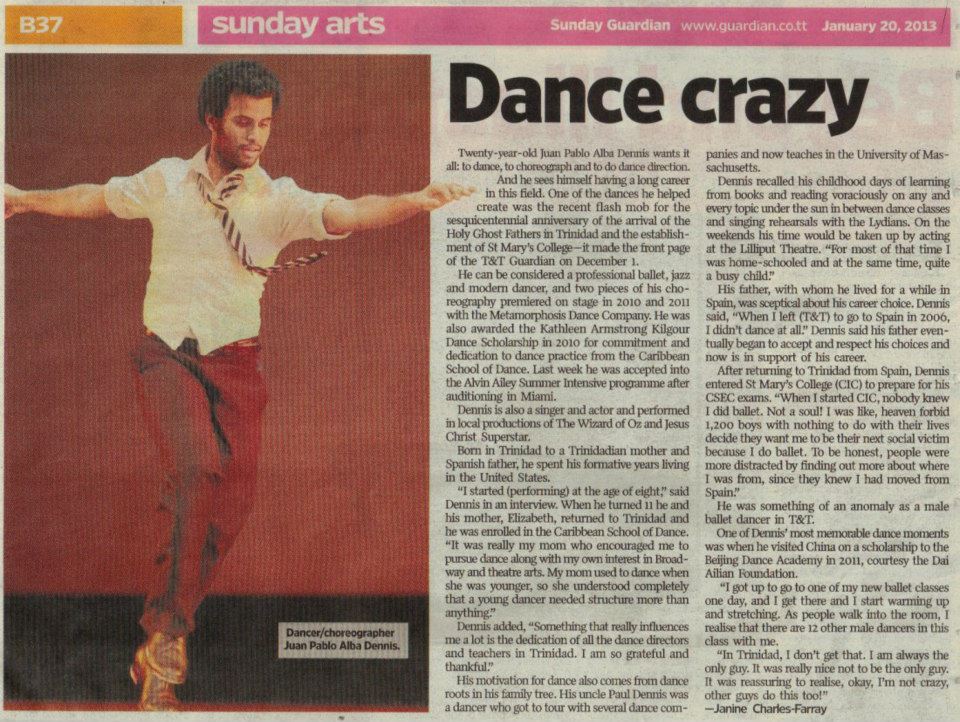 Twenty-year-old Juan Pablo Alba Dennis wants it all: to dance, to choreograph, and to do dance direction. And he sees himself having a long career in this field. One of the dances he helped create was the recent flash mob for the sesquicentennial anniversary of the arrival of the Holy Ghost Fathers in Trinidad and the establishment of St Mary’s College–it made the front page of the T&T Guardian on December 1.

He can be considered a professional ballet, jazz, and modern dancer, and two pieces of his choreography premiered on stage in 2010 and 2011 with the Metamorphosis Dance Company. He was also awarded the Kathleen Armstrong Kilgour Dance Scholarship in 2010 for commitment and dedication to dance practice from the Caribbean School of Dance. Last week he was accepted into the Alvin Ailey Summer Intensive programme after auditioning in Miami. Dennis is also a singer and actor and performed in local productions of The Wizard of Oz and Jesus Christ Superstar.

Born in Trinidad to a Trinidadian mother and Spanish father, he spent his formative years living in the United States. “I started (performing) at the age of eight,” said Dennis in an interview. When he turned 11 he and his mother, Elizabeth, returned to Trinidad and he was enrolled in the Caribbean School of Dance. “It was really my mom who encouraged me to pursue dance along with my own interest in Broadway and theatre arts. My mom used to dance when she was younger, so she understood completely that a young dancer needed structure more than anything.”

Dennis added, “Something that really influences me a lot is the dedication of all the dance directors and teachers in Trinidad. I am so grateful and thankful.”His motivation for dance also comes from dance roots in his family tree. His uncle Paul Dennis was a dancer who got to tour with several dance companies and now teaches at the University of Massachusetts. Dennis recalled his childhood days of learning from books and reading voraciously on any and every topic under the sun in between dance classes and singing rehearsals with the Lydians. On the weekends his time would be taken up by acting at the Lilliput Theatre. “For most of that time I was home-schooled and at the same time, quite a busy child.”

His father, with whom he lived for a while in Spain, was skeptical about his career choice. Dennis said, “When I left (T&T) to go to Spain in 2006, I didn’t dance at all.” Dennis said his father eventually began to accept and respect his choices and now is in support of his career. After returning to Trinidad from Spain, Dennis entered St Mary’s College (CIC) to prepare for his CSEC exams. “When I started CIC, nobody knew I did ballet. Not a soul! I was like, heaven forbid 1,200 boys with nothing to do with their lives decide they want me to be their next social victim because I do ballet. To be honest, people were more distracted by finding out more about where I was from since they knew I had moved from Spain.”

He was something of an anomaly as a male ballet dancer in T&T.One of Dennis’ most memorable dance moments was when he visited China on a scholarship to the Beijing Dance Academy in 2011, courtesy of the Dai Ailian Foundation.”I got up to go to one of my new ballet classes one day, and I get there and I start warming up and stretching. As people walk into the room, I realize that there are 12 other male dancers in this class with me.”In Trinidad, I don’t get that. I am always the only guy. It was really nice not to be the only guy. It was reassuring to realize, okay, I’m not crazy, other guys do this too!”