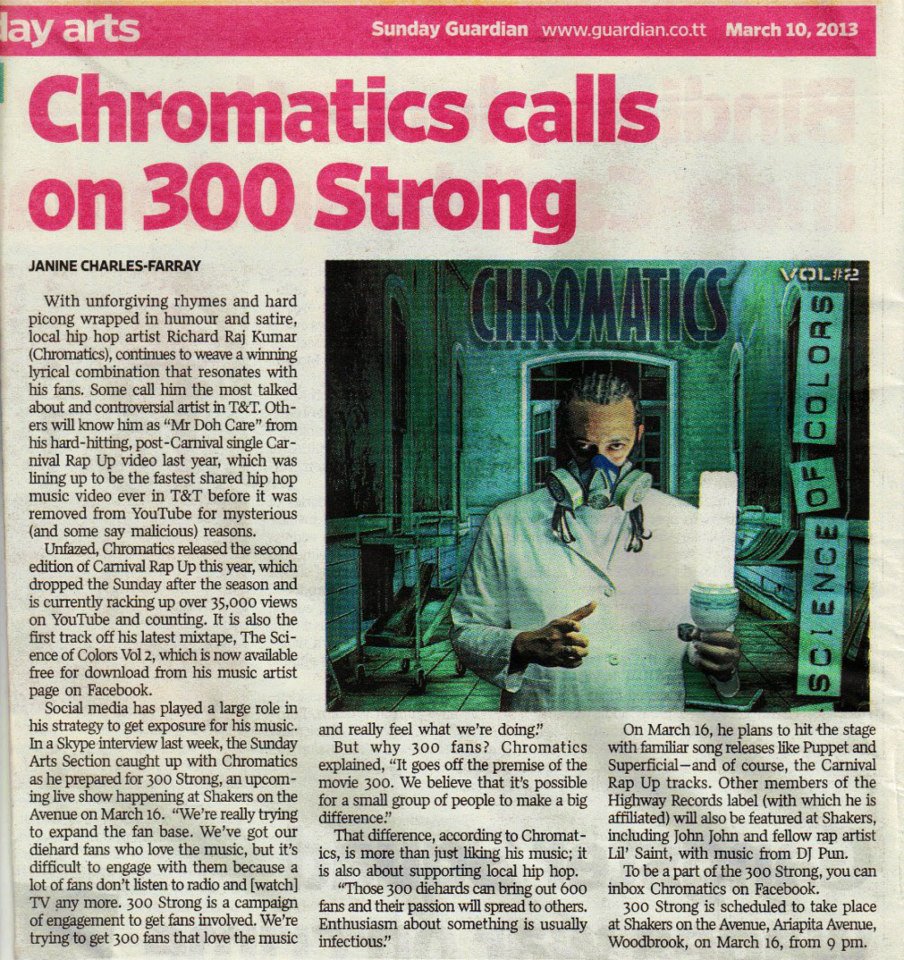 With unforgiving rhymes and hard picong wrapped in humour and satire, local hip hop artist Richard Raj Kumar (Chromatics), continues to weave a winning lyrical combination that resonates with his fans. Some call him the most talked about and controversial artist in T&T. Others will know him as “Mr Doh Care” from his hard-hitting, post-Carnival single Carnival Rap Up video last year, which was lining up to be the fastest shared hip hop music video ever in T&T before it was removed from YouTube for mysterious (and some say malicious) reasons.

Unfazed, Chromatics released the second edition of Carnival Rap Up this year, which dropped the Sunday after the season and is currently racking up over 35,000 views on YouTube and counting. It is also the first track off his latest mixtape, The Science of Colors Vol 2, which is now available free for download from his music artist page on Facebook. Social media has played a large role in his strategy to get exposure for his music. In a Skype interview last week, the Sunday Arts Section caught up with Chromatics as he prepared for 300 Strong, an upcoming live show happening at Shakers on the Avenue on March 16. “We’re really trying to expand the fan base. We’ve got our diehard fans who love the music, but it’s difficult to engage with them because a lot of fans don’t listen to radio and [watch] TV anymore. 300 Strong is a campaign of engagement to get fans involved. We’re trying to get 300 fans that love the music and really feel what we’re doing.”

But why 300 fans? Chromatics explained, “It goes off the premise of the movie 300. We believe that it’s possible for a small group of people to make a big difference.” That difference, according to Chromatics, is more than just liking his music; it is also about supporting local hip hop.”Those 300 diehards can bring out 600 fans and their passion will spread to others. Enthusiasm about something is usually infectious.”On March 16, he plans to hit the stage with familiar song releases like Puppet and Superficial–and of course, the Carnival Rap Up tracks. Other members of the Highway Records label (with which he is affiliated) will also be featured at Shakers, including John John and fellow rap artist Lil’ Saint, with music from DJ Pun. To be a part of the 300 Strong, you can inbox Chromatics on Facebook.300 Strong is scheduled to take place at Shakers on the Avenue, Ariapita Avenue, Woodbrook, on March 16, from 9 pm.