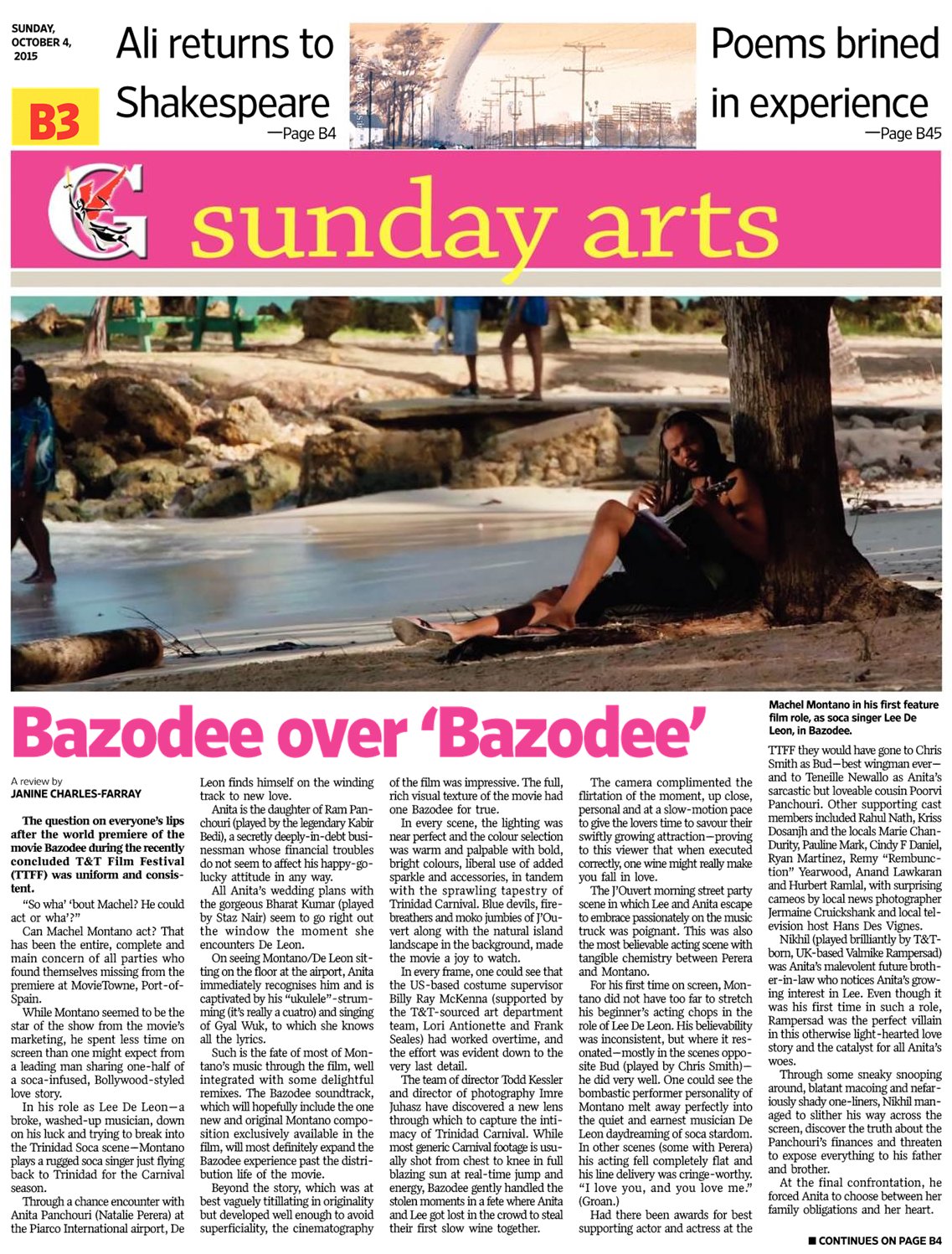 The question on everyone’s lips after the world premiere of the movie Bazodee during the recently concluded T&T Film Festival (TTFF) was uniform and consistent.

Can Machel Montano act? That has been the entire, complete and main concern of all parties who found themselves missing from the premiere at MovieTowne, Port-of-Spain.

While Montano seemed to be the star of the show from the movie’s marketing, he spent less time on screen than one might expect from a leading man sharing one-half of a soca-infused, Bollywood-styled love story.

In his role as Lee De Leon—a broke, washed-up musician, down on his luck and trying to break into the Trinidad Soca scene—Montano plays a rugged soca singer just flying back to Trinidad for the Carnival season.

Through a chance encounter with Anita Panchouri (Natalie Perera) at the Piarco International airport, De Leon finds himself on the winding track to new love.

Anita is the daughter of Ram Panchouri (played by the legendary Kabir Bedi), a secretly deeply-in-debt businessman whose financial troubles do not seem to affect his happy-go-lucky attitude in any way.

All Anita’s wedding plans with the gorgeous Bharat Kumar (played by Staz Nair) seem to go right out the window the moment she encounters De Leon.

On seeing Montano/De Leon sitting on the floor at the airport, Anita immediately recognises him and is captivated by his “ukulele”-strumming (it’s really a cuatro) and singing of Gyal Wuk, to which she knows all the lyrics.

Such is the fate of most of Montano’s music through the film, well integrated with some delightful remixes. The Bazodee soundtrack, which will hopefully include the one new and original Montano composition exclusively available in the film, will most definitely expand the Bazodee experience past the distribution life of the movie.

Beyond the story, which was at best vaguely titillating in originality but developed well enough to avoid superficiality, the cinematography of the film was impressive. The full, rich visual texture of the movie had one Bazodee for true.

In every scene, the lighting was near perfect and the colour selection was warm and palpable with bold, bright colours, liberal use of added sparkle and accessories, in tandem with the sprawling tapestry of Trinidad Carnival. Blue devils, fire-breathers and moko jumbies of J’Ouvert along with the natural island landscape in the background, made the movie a joy to watch.

In every frame, one could see that the US-based costume supervisor Billy Ray McKenna (supported by the T&T-sourced art department team, Lori Antionette and Frank Seales) had worked overtime, and the effort was evident down to the very last detail.

The team of director Todd Kessler and director of photography Imre Juhasz have discovered a new lens through which to capture the intimacy of Trinidad Carnival. While most generic Carnival footage is usually shot from chest to knee in full blazing sun at real-time jump and energy, Bazodee gently handled the stolen moments in a fete where Anita and Lee got lost in the crowd to steal their first slow wine together.

The camera complimented the flirtation of the moment, up close, personal and at a slow-motion pace to give the lovers time to savour their swiftly growing attraction—proving to this viewer that when executed correctly, one wine might really make you fall in love.

The J’Ouvert morning street party scene in which Lee and Anita escape to embrace passionately on the music truck was poignant. This was also the most believable acting scene with tangible chemistry between Perera and Montano.

For his first time on screen, Montano did not have too far to stretch his beginner’s acting chops in the role of Lee De Leon. His believability was inconsistent, but where it resonated—mostly in the scenes opposite Bud (played by Chris Smith)—he did very well. One could see the bombastic performer personality of Montano melt away perfectly into the quiet and earnest musician De Leon daydreaming of soca stardom. In other scenes (some with Perera) his acting fell completely flat and his line delivery was cringe-worthy. “I love you, and you love me.” (Groan.)

Nikhil (played brilliantly by T&T-born, UK-based Valmike Rampersad) was Anita’s malevolent future brother-in-law who notices Anita’s growing interest in Lee. Even though it was his first time in such a role, Rampersad was the perfect villain in this otherwise light-hearted love story and the catalyst for all Anita’s woes.

Through some sneaky snooping around, blatant macoing and nefariously shady one-liners, Nikhil managed to slither his way across the screen, discover the truth about the Panchouri’s finances and threaten to expose everything to his father and brother.

At the final confrontation, he forced Anita to choose between her family obligations and her heart.

(Spoiler alert: Anita chooses her heart and it blows up in her face spectacularly.)

For a man who spent most of the movie lauding the tenets of fate and destiny with joie de vivre, Ram Panchouri flew into patriarchal rage very quickly when Nikhil revealed the affair between Anita and Lee. Anita’s fiancé Bharat was also disappointingly unforgiving, breaking off the engagement and storming back to the UK.

But this movie is a musical. So after spending almost an hour-and-a-half building up all this dramatic tension, Bazodee chose to resolve all the loose ends with an out-of-nowhere soca-Bollywood group song and dance on a beach in Tobago, which seemed too suddenly and neatly tied up to be believed.

Overall, one should not squint too hard at Bazodee and take it for anything more than an entertaining, light-hearted take on love.