Albert Laveau still batting for the TTW at 80 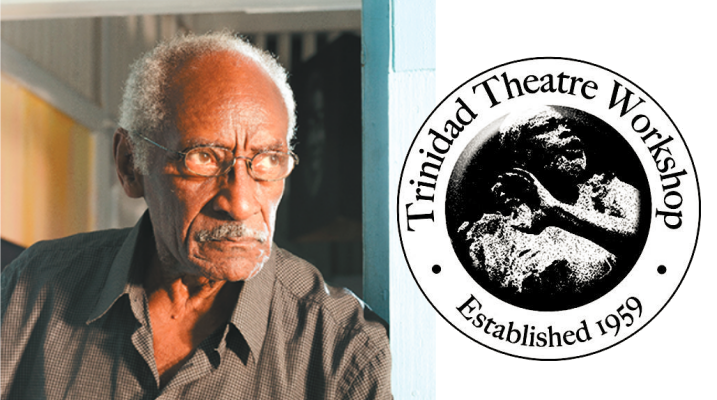 After a big, celebratory birthday bash put on by his staff and friends of the Trinidad Theatre Workshop (TTW) on July 4, actor, theatre veteran and TTW artistic director Albert Laveau sat talking with a guest at his picturesque and art-filled home in the hills of Santa Margarita.”This is surprising to me. I didn’t expect to be 80 years old,” he confessed with mild surprise.

“I never used to think about it. But I almost got killed a couple of times, you know,” he confided, his eyes alight with mystery and a twinkle of mischief.”They not ready for me yet, I still have work to do,” he said knowingly.Doing good work is probably one of the things for which Albert Laveau would like to be known. He is a man who says he has always been infused with purpose and one who understands the value of having work to do.

In recounting his life’s work, Laveau took the long and adventurous storytelling road, over the hills and valleys of his career and through the winding paths of his personal life from his youth growing up in Plaisance Park, Point-a-Pierre.

He started performing in his father’s living room as a young boy, surrounded by his siblings. Storytelling, singing and inter-family entertainment by lamplight were the norm in a 1940s rural community, where the only electricity people knew were the search lights of the World War II planes that flew over the village from time to time.

“Every year there was a new baby until we ended up with about nine or ten–a whole theatre company,” he said, joking.”But it broke up when I was about nine. They sent me to live with my grandfather who was getting old. He had always liked me, they said.”A self-confessed optimist, he included anecdotes of the creative punishments meted out by his grandfather’s caretaker “Aunty Angie,” whom he called “a wicked woman.”

Surviving the house of his grandfather was particularly challenging. “They used to say things to make me feel less confident in myself, so eventually I became a silent child, except for when I went to school,” he said, the twinkle returning to his spectacled gaze. “In school I was garrulous!”At Carapichaima RC School, Laveau was encouraged by one particular teacher who would write skits and host school concerts. Laveau found the spotlight again and was once more able to have his talent on the stage shine.

He was also a church-going Catholic and eventually became an acolyte. At the altar, like the stage, Laveau revelled in the ritual and ceremony and likened the experience to performance art for the Lord.As an adult he travelled the world both for his day job at Lever Brothers as well as an actor, most notably with poet, playwright and Nobel Laureate Derek Walcott and the TTW, which he joined in 1962.

Laveau secured a starring role as the devil in Walcott’s Ti Jean and his Brothers. The part launched his very lucrative and beneficial career as a professional actor in the United States of America in the early 70s.From the initial export of the Ti Jean play to the New York Shakespeare Festival, Laveau rode the momentum of rave reviews and positive attention to hire an agent and create bookings for himself in the US.

He eventually travelled across the US on tour with Joseph A Walker’s hit Broadway musical The River Niger, an African American play which won the 1974 Antoinette Perry Award at the Tonys among several other honours.In 1977, after four years of a US acting career, Laveau returned to T&T and to the TTW.

Laveau believes nurturing the artistic abilities of young people adds positively to their overall development as individuals. He brings this belief and his faith in that process to his work with the TTW.”I wanted to have more Trinidadians who keep talking about professional acting and going abroad to be successful, know about [the experience I had]. But when I came back, the TTW was going through a kind of crossroads, Derek and his personal life was infringing on the workshop.

“He pulled out and then I offered to help run it. They wanted to run it their way. A fracture was taking place, but if we wanted it to continue, it had to change and be something else. I told them this was the time to focus on training–to establish a school of training.”For 12 years Laveau worked on his vision for building and expanding the training element of the TTW. He was met with considerable resistance.

Laveau reflected on this period.”I realised that I was being treated with hostility, not only for going away to be a professional actor, but for coming back! ‘What did you come back for?’, their resistance seemed to say. These were people who I thought were my friends. Eventually,” he added, wryly, “They did truly become my friends.”

In light of the recent establishment of a new National Theatre Arts Co by the Ministry of the Arts and Multiculturalism, Laveau said he did not feel betrayed as much as dismayed. In the past he’s said the TTW was “a national theatre”; Judy Raymond wrote that Prof Rex Nettleford called it “the flagship of the theatre movement in the Caribbean.”

“I don’t feel betrayed, but I think they are misguided,” Laveau said with a chuckle. “We were ‘informally’ the national theatre arts company because we were doing and are continuing to do the work of such an organisation.”

Past work of the TTW included annual Caribbean tours of the theatre company to several neighbouring islands to perform, engage and share understanding among the people of the Caribbean in the wake of the West Indies Federation failure of the 1960s.

In the 1990s the TTW’s work also included touring to US universities and collaborating with education institutions such as Boston University and Harvard to create scholarships for TTW members and trainees to go abroad to study theatre in an international setting. Often times scholarship exchanges would take place and foreign students would also come to Trinidad for internships at the TTW.

In 2003, the University of Toronto Library purchased the entire archival catalogue of the TTW for its preservation–over 14 boxes of everything from show reviews, newspaper and photographic original clippings, workbooks, scripts to VHS tapes of play performances.The reputation and long-standing legacy of the TTW has been a beacon for many regional and international arts organisations and Trinidad remains an underdeveloped destination for cultural and theatre exchange for the rest of the world.

These days Laveau’s role involves being consulted with for his ideas and his knowledge of TTW’s historical context. Still, he remains committed to the task at hand, which now includes cementing the legacy of the TTW by securing a permanent home and base of operations.Laveau remains optimistic that the Ministry of Arts and Multiculturalism will assist the TTW as it did the Little Carib Theatre in preserving this important historical landmark of Caribbean theatre.

In the past, the TTW has hoisted its flag at several locations including at Bretton Hall Hotel basement, the Old Fire Station next to the National Library, as well as the Little Carib Theatre. An old gingerbread house on Jerningham Avenue, Belmont, is its current residence. The building is up for sale–at a cost of $2 million.

“We are opening discussion with the ministry and other corporate entities because we have the opportunity to buy our current space in Belmont. We are also doing a crowd funding venture and its going slowly but it will pick up.”For Laveau, the mission of securing a permanent space is to continue the work of the last 50 years and to preserve the authentic soul of Caribbean theatre.

“This is what I dreamt about: a centre where people can meet, exchange ideas as we used to do when we had a theatre workshop wherever we were, when Derek Walcott was there. People were flying in from all over the place, passing through and they would come down and meet us here.

“You’d meet big luminaries in theatre, writers and poets all in the same space, like (novelist John) Hearne and (poet) John Figueroa from Jamaica, poets and playwrights, (Guyanese novellist) Jan Carew and (Guyanese poet) Martin Carter. All these people would come and meet down in that basement in Bretton Hall because they knew we were there. This space will be the nucleus for the professional explosion of theatre in Trinidad.

“I know that I may not be here to see it, but I want to finish the work, plant the seeds and give the people of T&T the building, at least. From there, the space will then infuse the entire community and the country. People respect the space and that’s the space that the TTW is meant to be.”