A tribute to love, literature 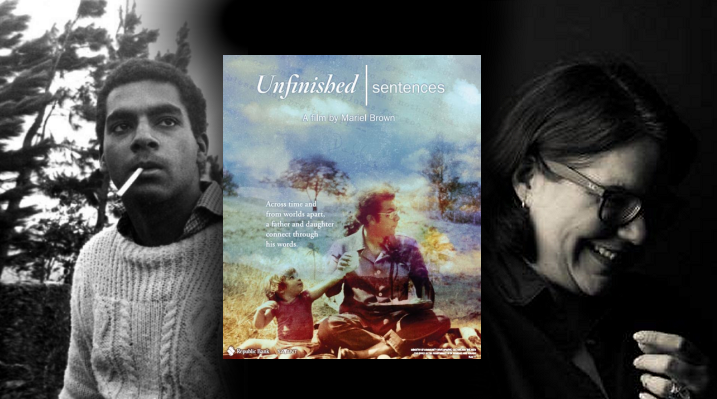 When loved ones die, unfinished business can linger and haunt those who remain with words left unsaid. T&T filmmaker Mariel Brown has chosen to find catharsis and pay tribute through audio-visual expression in her upcoming documentary.

The feature-length film, Unfinished Sentences is based on the life and work of her late father, poet, author and Caribbean literary icon Wayne Brown.

An award-winning documentary filmmaker, Brown has been known for producing stellar work in the T&T film industry. In her films on diverse topics–from the insatiable season of Trinidad Carnival, to the solitary alchemy of master artisans and even the inward hunger for excellence of the late Dr Eric Williams–Brown is known for her sensitive and visually stunning explorations of the lives of remarkable personalities.

Earlier this month, her production company, Savant Films, officially announced the Unfinished Sentences film production. This project is a journey six years in the making since Wayne Brown’s death in 2009, and is intended to reveal the life and work of one of the most remarkable personalities of Caribbean literature.

The film is being co-produced by Brown’s daughters Mariel and Saffrey, with cast including actor Renaldo Frederick as a younger Wayne Brown and Sophie Wight as his wife Megan. The two Brown sisters will be played by child actors and first cousins, Che and Alessandra Jardine. Noted actress Patti-Anne Ali will also be doing voice work on the film, along with Nigel Scott and musician/actor Nickolai Salcedo.

In Unfinished Sentences, Mariel unpacks her father’s life, going through five decades of his private letters, jotted musings, published and unpublished poems, columns and essays to get to the heart of who he was. In so doing, she hopes to reconnect with all she thinks she has lost.

Brown defies the finality of death through film and treasures their father-daughter relationship through revisiting her father’s life, his writings, the friends and readers who loved his work, and her own personal journey as his beloved daughter.

The key moment for Brown in deciding to do the film came over dinner with friends, when she was encouraged by an avid reader of one of her father’s books.

“I went to dinner with my mother and dear friends of hers, Barbie Jardine and Mark Pereira. [As a young man] Mark had coincidentally read my dad’s biography of Edna Manley, Edna Manley: The Private Years… He was very encouraging; he just kept saying, ‘You’ve got to make this film or you are going to lose it.’ Then this idea hit me that if I don’t find a way to do this, I will lose the story somehow. It kind of scared me.”

The film journey of Unfinished Sentences began in 2010 and within a year Brown began to capture on camera interviews in Jamaica with the poet Mervyn Morris and another of her father’s dear friends, Michael Prescott.

“I just very slowly started doing these interviews, and then I’d write a few notes and then put it away to grieve some more and then I’d bring it out again, then put it away, and so on. I worked on the idea for many years before it became clear to me what the film should be about. It really coalesced for me late last year, in 2014.”

Other interviews to be featured in the documentary include Jamaican writer and political scion Rachel Manley, Megan Hopkyn-Rees, who Wayne Brown married in 1968 and divorced in 1981, and the couple’s younger daughter Saffrey Brown. Interviews with childhood friends of Wayne Brown such as Ronald and Richard Harford will also form a part of the story.

Additionally, Brown intends to interview writers who were most influenced by her father’s works in the Caribbean but is still working out which of these writers will be included in the story.

Unfinished Sentences will feature two directors of photography: Sean Edghill, with whom Brown has been working with since 1997, and photographer Nadia Huggins.

“There are two kinds of visual approaches to the film–one is recreation and re-enactment and the other is a very poetic visual aesthetic which is more evocative and telling. Nadia is doing the poetic aesthetic and Sean is doing the recreations.”

The film score will be done by composer Francesco Emmanuel, who worked on Brown’s Inward Hunger (2011), and costume design will be handled by Lisa Gittens.

According to Brown, the heart of the story is about family and about love, loss and art. She believes the film will contain all things that people can relate to, particularly the core dynamic of the relationship between a father and daughter.

“It’s a very personal film. It’s very involved in my own personal life. I came to this business as a journalist and as a journalist it’s never about you–it should never be about you, only about the news going on around you.

The film will be set in many locations, including both T&T and Jamaica.

“I definitely intend to shoot up in the Blue Mountains, also at Norman and Edna Manley’s family cottage called Nomdmi. We’re probably going to shoot at Treasure Beach, and we have already shot at Maracas Beach here in Trinidad and at Toco, Yara and in the Gulf of Paria.

“The sea is one of the main visual metaphors in the film so that is the visual thread that will run through it.”

She hopes that the film will be in post-production by October/November this year and completed by March 2016. Ideally she would like Unfinished Sentences to have a life at international film festivals and also intends to screen the film in T&T.

Film financing, one of the most common challenges for creative projects remains a challenge.

“I’ve raised about 40 per cent of financing so far and the fund-raising has been going well, but it is still ongoing.”

To the audiences who will see the finished film, Brown shares a final wish.

“I am just hoping that the Trinidad audience will respond well to a film that is deeply personal and full of love.”