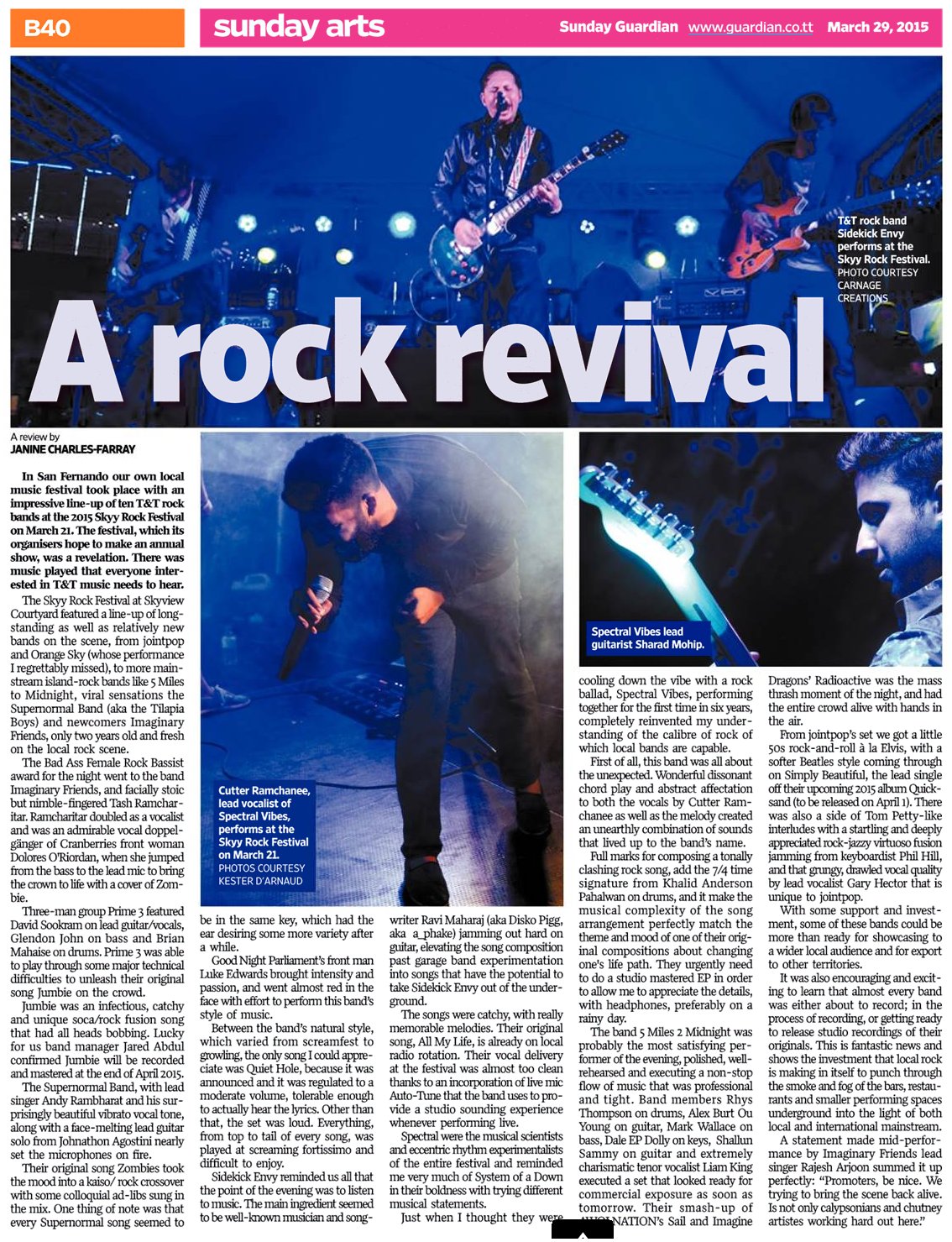 In San Fernando our own local music festival took place with an impressive line-up of ten T&T rock bands at the 2015 Skyy Rock Festival on March 21. The festival, which its organisers hope to make an annual show, was a revelation. There was music played that everyone interested in T&T music needs to hear.

The Skyy Rock Festival at Skyview Courtyard featured a line-up of long-standing as well as relatively new bands on the scene, from jointpop and Orange Sky (whose performance I regrettably missed), to more mainstream island-rock bands like 5 Miles to Midnight, viral sensations the Supernormal Band (aka the Tilapia Boys) and newcomers Imaginary Friends, only two years old and fresh on the local rock scene.

The Bad Ass Female Rock Bassist award for the night went to the band Imaginary Friends, and facially stoic but nimble-fingered Tash Ramcharitar. Ramcharitar doubled as a vocalist and was an admirable vocal doppelganger of Cranberries frontwoman Dolores O’Riordan, when she jumped from the bass to the lead mic to bring the crown to life with a cover of Zombie.

Three-man group Prime 3 featured David Sookram on lead guitar/vocals, Glendon John on bass, and Brian Mahaise on drums. Prime 3 was able to play through some major technical difficulties to unleash their original song Jumbie on the crowd.

Jumbie was an infectious, catchy, and unique soca/rock fusion song that had all heads bobbing. Lucky for us band manager Jared Abdul confirmed Jumbie will be recorded and mastered at the end of April 2015.

The Supernormal Band, with lead singer Andy Rambharat and his surprisingly beautiful vibrato vocal tone, along with a face-melting lead guitar solo from Johnathon Agostini nearly set the microphones on fire.

Their original song Zombies took the mood into a kaiso/ rock crossover with some colloquial ad-libs sung in the mix. One thing of note was that every Supernormal song seemed to be in the same key, which had the ear desiring some more variety after a while.

Good Night Parliament’s frontman Luke Edwards brought intensity and passion and went almost red in the face with effort to perform this band’s style of music.

Between the band’s natural style, which varied from screamfest to growling, the only song I could appreciate was Quiet Hole, because it was announced and it was regulated to a moderate volume, tolerable enough to actually hear the lyrics. Other than that, the set was loud. Everything, from top to tail of every song, was played at screaming fortissimo and difficult to enjoy.

Sidekick Envy reminded us all that the point of the evening was to listen to music. The main ingredient seemed to be well-known musician and songwriter Ravi Maharaj (aka Disko Pigg, aka a_phake) jamming out hard on guitar, elevating the song composition past garage band experimentation into songs that have the potential to take Sidekick Envy out of the underground.

The songs were catchy, with really memorable melodies. Their original song, All My Life, is already on local radio rotation. Their vocal delivery at the festival was almost too clean thanks to an incorporation of live mic Auto-Tune that the band uses to provide a studio sounding experience whenever performing live.

Spectral were the musical scientists and eccentric rhythm experimentalists of the entire festival and reminded me very much of System of a Down in their boldness with trying different musical statements.

Just when I thought they were cooling down the vibe with a rock ballad, Spectral Vibes, performing together for the first time in six years, completely reinvented my understanding of the calibre of rock of which local bands are capable.

First of all, this band was all about the unexpected. Wonderful dissonant chord play and abstract affectation to both the vocals by Cutter Ramchanee as well as the melody created an unearthly combination of sounds that lived up to the band’s name.

Full marks for composing a tonally clashing rock song, add the 7/4 time signature from Khalid Anderson Pahalwan on drums, and it make the musical complexity of the song arrangement perfectly match the theme and mood of one of their original compositions about changing one’s life path. They urgently need to do a studio mastered EP in order to allow me to appreciate the details, with headphones, preferably on a rainy day.

The band 5 Miles 2 Midnight was probably the most satisfying performer of the evening, polished, well-rehearsed and executing a non-stop flow of music that was professional and tight. Band members Rhys Thompson on drums, Alex Burt Ou Young on guitar, Mark Wallace on bass, Dale EP Dolly on keys, Shallun Sammy on guitar and extremely charismatic tenor vocalist Liam King executed a set that looked ready for commercial exposure as soon as tomorrow. Their smash-up of AWOLNATION’s Sail and Imagine Dragons’ Radioactive was the mass thrash moment of the night, and had the entire crowd alive with hands in the air.

From jointpop’s set we got a little 50s rock-and-roll � la Elvis, with a softer Beatles style coming through on Simply Beautiful, the lead single off their upcoming 2015 album Quicksand (to be released on April 1). There was also a side of Tom Petty-like interludes with a startling and deeply appreciated rock-jazzy virtuoso fusion jamming from keyboardist Phil Hill, and that grungy, drawled vocal quality by lead vocalist Gary Hector that is unique to jointpop.

With some support and investment, some of these bands could be more than ready for showcasing to a wider local audience and for export to other territories.

It was also encouraging and exciting to learn that almost every band was either about to record; in the process of recording, or getting ready to release studio recordings of their originals. This is fantastic news and shows the investment that local rock is making in itself to punch through the smoke and fog of the bars, restaurants and smaller performing spaces underground into the light of both local and international mainstream.

A statement made mid-performance by Imaginary Friends lead singer Rajesh Arjoon summed it up perfectly: “Promoters, be nice. We trying to bring the scene back alive. Is not only calypsonians and chutney artistes working hard out here.”